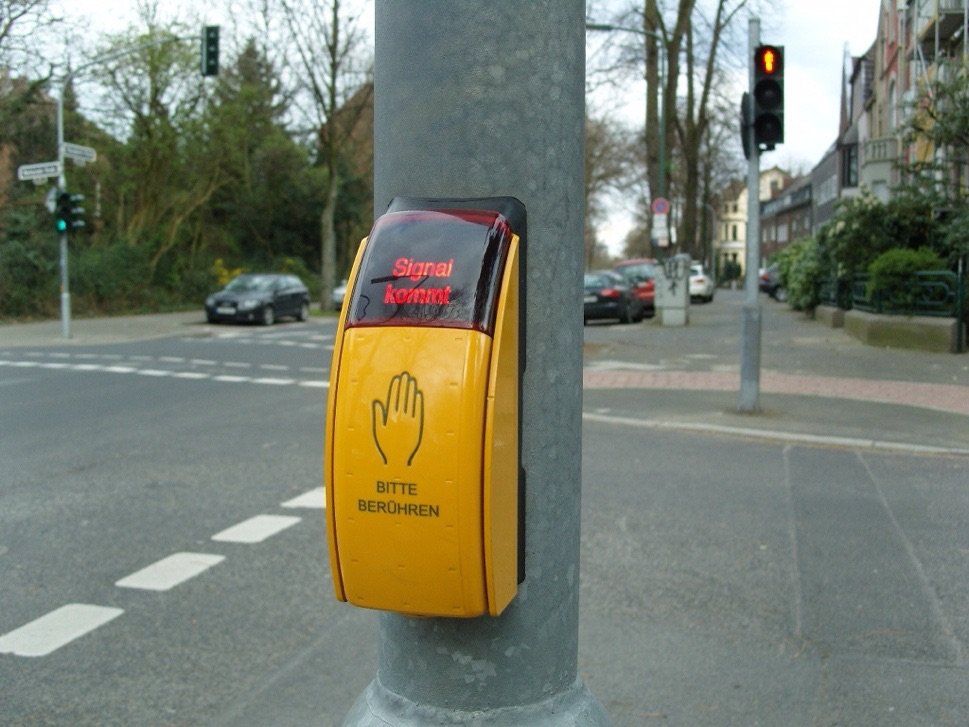 In the UK it’s known as the Highway Code and such a code of conduct exists in Germany too.They are an exciting set of instructions drummed into children by parents in their persistent attempt to rescue them from finding out how soft flesh and hard metal interact. Yet jaywalking was born with the invention of the wheel. Planners in every town in every country build crossings and invest in lights, whilst legislators proudly package rules and regulations that are more or less enthusiastically followed.

Crossing a street in Neuss to this day still reveals a discipline that is seldom experienced elsewhere. When the red light is showing at a pedestrian crossing, pedestrians mostly wait for a green one. Even if no traffic is passing. Police have to intercept those that cross and other people glare or comment at those not setting a good example. Peer pressure at its finest.

On a lighter note: When asked his age in an interview for radio, apparently the infamous Bob Hope responded that he had just turned 80 but, when he adds to that, the time he has spent at airports, he was actually 82. This anecdote can be plagiarised and adapted for Germans who are able to stand patiently for excruciatingly long periods at a red light on completely empty streets.

This writer’s belief is that it is better to teach offspring to watch for cars and think for themselves rather than mindlessly stare at red lights but I’m a foreigner. Some statistics prove it true that less accidents happen in other countries. A reckless suggestion for which no responsibility is accepted: Those who find it impossible to adapt, should take a look around before crossing. See if there are children, parents accompanied by youngsters and kids in prams or perhaps the elderly or frail people who might thoughtlessly follow into passing cars. Or police officers! If not, then pedestrians may wish to feel free to take life and responsibility into their own hands. By the way, the fine for the infringement is as surprisingly low as so many others in German law.